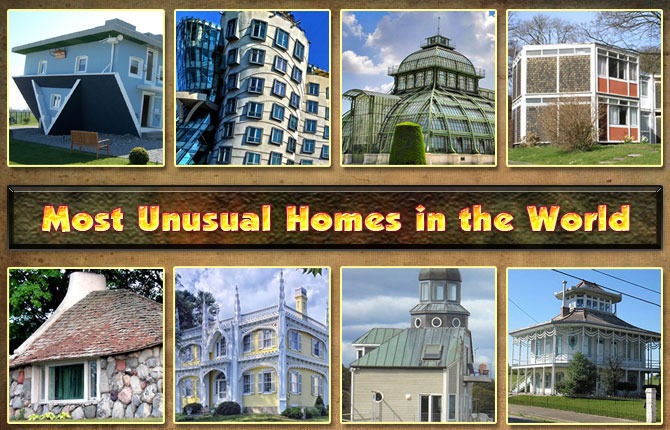 We’ve all seen many different homes over the years, but there are always some that make our eyes bug out. Some people live in apartments, some live in mansions, while others make do with mobile homes. Still, there’s a certain kind of standard that all these types maintain, so you wouldn’t think they’re anything out of the ordinary.

A lot of people think out of the box, and as a result, their homes end up looking like something very different from a box as well! Check out the fascinating unusual homes from all around the world below: The Palm House is one of the gardens located at the Schönbrunn Palace in Vienna, Austria. Built during the 1800s, the house is split into three pavilions and three climate zones, featuring several Mediterranean, subtropical and tropical plants. This house is also called “Fred and Ginger” in homage to the legendary Hollywood actors/dancers Fred Astaire and Ginger Rogers. Located in Prague, Czech Republic, it was designed by architect Vlado Milunic and Frank Gehry, and was completed in 1996.

This non-traditional design was very controversial when it was built, as it stands out from the famous Art Noveau, Gothic, and Baroque buildings that usually characterize the city of Prague. According to some critics, the house simply does not go with the usual tone of the area. However, the then Czech president supported the project while it was ongoing; rightly believing that it would become a popular tourist attraction.

The architectural style here is called new-baroque of deconstructivist. Its unique shape is due to the 99 concrete panels, with each one being a different dimension and shape. There are also several unaligned widows with 3-D effects and undulating moldings. While the building is the same height as those in the surrounding area, it actually has two more floors than them. In many parts of the world — from Russia to Germany to China — a number of individuals have constructed upside-down houses. While this might have been an interest in itself, it’s mostly a way to attract tourists.

You might find an upside-down house in Thailand, Malaysia, Poland, Canada, and the United States as well as several other countries. These houses are complete with furnishings which, as you may have guessed it, are inverted. Some houses might not even be livable, but they present great photo ops for your Instagram account! The novelist Catherine Cookson has a highly unusual house. This is located in Killeenaran Townland, County Galway, Ireland. It has grass growing on top and gives the impression of being under a hill.

Also known as “Half House,” this was designed and built by American architect Earl A. Young (1889-1975). Although he was never a registered architect, Young was responsible for creating 31 buildings in Charlevoix, Michigan. Young was known for his mushroom homes, gnome houses or Hobbit houses, mostly built in different types of stone. The Doullut Steamboat Houses are some of the most iconic houses in New Orleans, Louisiana. They were mostly built during the early 1900s. More specifically, they were built between 1905 and 1913 for the most part. There was a father and son team behind this project, with the father being a steamboat captain.

The houses were built to resemble steamboats, even having smokestacks in lace of chimneys. The result is not just unusual, but a genius way of making an amazingly strong structure. This was proven by the fact that even the Hurricane Katrina was unable to destroy these houses, even though they were located inside the Lower Ninth Ward. Many have attributed this hardiness to the first floors of these houses, which are made of solid ceramic. There are a lot of hexagon houses found in many parts of the world. There’s a development of hexagon homes in Cubbington, Royal Leamington Spa. The six-sided design holds a lot of appeal for those who want to make their houses stand out.

Some hexagon houses might even have furniture that reflects this unique architectural shape, with even the skylights taking on a hexagon effect. However, one of the earliest and most iconic examples is the Hexagon house in Winchester, Virginia. This was constructed in two years, from 1871 to 1873. It has two stories, a chimney in the center and a low roof. There’s also a three-bay porch on the main façade.

The construction of this house was designed by Brice Leatherman, an architect who was hired by James W. Burgess. The purpose here was to open up the interior of the house and provide a way to let more daylight inside. There are also octagonal houses, but hexagons are rarer. This is a lone house standing right on the salt marsh within the Merrimack River, Joppa Flats, Newburyport, Massachusetts, United States. The house was illegally built but is now an interesting addition to the landscape. According to a story, a man just began building this house before anyone else knew what he was doing, and the house was completed before anyone could report him to the authorities. The official name of this house is the “Wedding Cake House” due to its wedding cake appearance, especially with the embellishments that resemble a cake icing. It is located in the town of Kennebunk, Maine. It was designed by architect George W. Bourne and was completed in the 19th century. The house is dubbed as the “most photographed house in the state” of Maine.

This house is located in Tokyo, Japan. It might not be the best option if you want privacy, but it’s certainly great for having the maximum amount of light indoors. This particular structure was made by Sou Fujimoto Architects and is more of an inspired art form.

The inspiration behind the Transparent House is the lifestyle of our ancestors, who might have lived in trees at some point. Still, this residence is definitely not for everyone.

Sometimes, a house can reflect the hobby and passion of those who’re living in it. This house is one of such dwellings, as it’s designed like a huge skateboarding rink. The designer here is Pierre Andre Senizergues, who’s a former world champion in professional skateboarding.

Located in Malibu, California, this house is designed to bring the practice of skateboarding inside. While there are regular rooms such as the bathroom, kitchen, living room, and bedrooms, a whole section is devoted to a giant skateboarding rink.

Anyone interested in the unusual houses described above would probably also like to know more about architectural styles. With the book entitled ‘A Field Guide to American Houses: The Definitive Guide to Identifying and Understanding America’s Domestic Architecture’ you can do just that. You can view it here: The revised and expanded edition of this book gives curious house lovers, tourists, and researchers a taste of the styles in domestic architecture within America. Since this country is a melting pot of cultures from all over the world, the various architectural styles are very different from each other.

What’s really unique about this book is that it doesn’t concentrate on the famous landmarks that might have an unusual shape and design. Rather, it shows the reader some ordinary dwelling in everyday neighborhoods, allowing us to see houses in a very different way.

There are also more than a thousand illustrations in this work, which will allow one to easily recognize various styles and take inspiration from them. You’ll get to know what a particular cornice, door, or window represents. With thirty-nine chapters and each other concentrating on a certain style, you’ll soon have a plethora of knowledge at your disposal. This is not just an interesting exercise, but might also be able to help out when you’re renovating your home or establishing a career as an architect/home designer.

Everyone expresses themselves in tier own manner, but unusual homes aren’t always the decision of one individual or even one family. Many of the homes we’ve discussed above were constructed in order to enhance the tourism business in that area, while others were built to honor certain entities.

Whatever the reasons behind these unusual structures, it’s apparent that architecture certainly is a form of art. Designing an unusual house that’s still practical enough for everyday living is quite difficult to achieve. Houses that stand out reflect the designer’s and occupant’s personality, so you might also consider making a statement with your dwelling.