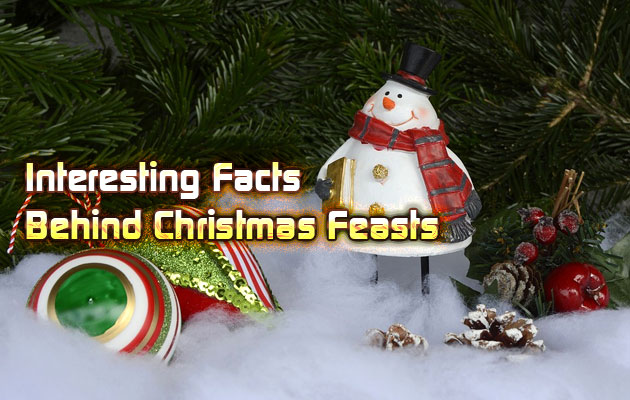 It won’t be Christmas without a sumptuous spread of the traditional feast on the table. Children and adults alike look forward to scrumptious items such as the roasted turkey (or another type of poultry), oven-baked ham, fruitcake, candy canes, pies, and a lot more.

However, not all the items on the traditional Christmas menu are as innocent as they seem. Have you ever wondered just why we have candy canes, sugarplums, fruitcakes, and all those mandatory items? We might not even like some of them, but they’re still considered must-haves.

Knowing the facts behind Christmas foods may either make you amazed or even have you reconsidering your holiday menu (yes, some of them are quite wacky). Let’s take a look at some of these traditional offerings and the stories behind them:

Love it or hate it, the fruitcake will always be a classic holiday fare. We know that a lot of you aren’t too shy to say you don’t like fruitcake. In most cases, if you have ever received a fruitcake as a Christmas present, you probably just let it rot inside the fridge. Still, you know that it just doesn’t rot too quickly, thanks to the combination of sugar and alcohol that help preserve the cake for a long time. Actually, fruitcakes were baked and traditionally meant to be eaten a year later for the start of the harvest season. This was meant to be good luck. The next time you get one of these cakes from anyone, you might as well donate it to someone needy. If you make them yourself just for the sake of tradition, perhaps you might want to stop. After all, the tradition has little to do with Christmas. Why not put that effort into something that everyone will enjoy eating, or perhaps switch up the recipe for a more palatable result?

According to legend, candy canes first appeared around the mid-17th century in Cologne, Germany. The cathedral’s choirmaster began handing out candies (which were shaped like a shepherd’s crook) to the children in order to keep them quiet during the church’s crèche scene. They weren’t even striped back then. Those came later on, perhaps to add a more festive touch.

This isn’t a shocking fact, but it’s certainly an interesting one. After all, we want children to remain well-behaved and as quiet as possible so that adults could enjoy the Christmas dinner in peace. Perhaps we should try handing out candy canes first thing at the next Christmas party (if we don’t already have this tradition). You might also consider putting candy canes on the children’s table so they wouldn’t be so inclined to disturb their parents.

When you hear the words “sugar plums,” you might not have guessed what it’s made of, right? Plums are fruit, but many books refer to sugar plums as being something like hard candies.

During the 17th century, the term “sugar plum” used to refer to a hard candy made of any kind of dried fruit. After the drying process, it was infused with sugar and spices. The final touch is a hard candy shell.  Despite the name, there’s no real plum in it.

How did turkey come to be the standard fowl during a holiday dinner? Way back in medieval England, peacock (or goose) was actually the poultry of choice to be served at a Christmas feast. It wasn’t until the 16th century, when Henry VIII first had turkey on his Christmas table, that this bird came to be known as a Christmas dinner essential. Since then this big bird has been the classic centerpiece on almost every holiday table. We suppose trends and fashions aren’t just limited to clothing or shoes, but also extend to the table.

Although mince pies today are either stuffed with fruits or vegetables, during the medieval era they used to be stuffed with minced beef and dried plums. Originally, the pies were topped with an effigy of the baby Jesus, in pastry form of course.

An estimated 300 million pies are consumed every Christmas! This speaks volumes about the number of calories we take in around this season.

The first introduction of animal crackers was at Christmastime back in 1902. You might have notice a string on some boxes that hold these delightful little snacks. This was because the boxes were meant for hanging on the Christmas tree.

Hanging socks or stocking at the foot of your bed or along the mantelpiece is a Christmas dinner that might have anything to do with the feats directly. When parents are playing Santa, though, they stuff their children’s socks with oranges or tangerines, along with sweets and nuts.

Where did the idea of putting tangerine in socks come from? It actually goes all the way back from an old tradition in France during the 1100s, where nuns placed socks full of tangerines, nuts and other fruits at almshouses. In the UK, when tangerines are placed in your socks, it means you’re nice instead of naughty.

The tangerine or orange concept also makes a lot of sense in a logical way. By putting an orange into the sock first, you create a buffer for all the other small items. This will save the sock from tearing and prevent the small items from getting caught in the material.  An orange or tangerine won’t bruise easily either, so you don’t have to worry about fruit juices getting into the sock and everything else.

Many Christmas celebrators have the traditional Christmas dinner concept stuck in their minds, even if the formula doesn’t work every time. Not everyone has the time or inclination to make a roast, especially with the special diets everyone seems to be on these days. We might also look forward to pie, pudding and mashed potatoes, but some healthier alternatives might be more appreciated for those who’re counting carbs.

The reality is that all these Christmas traditions are the result of cultural development over the years. There’s no reason why we simply have to stick to a certain menu, but the tradition is comforting nonetheless. This year, we might want to think about something different, such as grilling our dinners on a barbeque as the Australians do!