Whether you’re remodeling, adding on your home, or building a new home, knowing the architectural style of the house will help you develop your house better. Real estate has a language of its own, and you have to be aware of it. You must know the terms used to describe a home architectural style.

Home construction, renovation, and remodeling projects are challenging to accomplish by a homeowner alone. When homeowners ask for professional assistance from building contractors, they tend to overlook the architectural aspects of their property by not hiring the best architects available. However, remember that architecture plays a vital role in your living experience more than you can imagine.

With this in mind, here are top reasons why good residential architecture is important:

To get started, check out this list of typical home architectural styles and their descriptions. With roots dating back to the 1670s, Cape Cod was a popular style for homes built in the 1930s to 1950s. It got its name from the vacation destination from the coast of Massachusetts and is originally designed to withstand the harsh winters in the region. Cape Cod homes are known for their steep roofline that allows snow to melt off, a central hall with equal space on both sides. This style originated from half-timbered English houses with a hall and parlor.

Additionally, Cape Cod homes have exposed roof rafters that create the illusion of a larger ceiling and add flexibility to your interior design. An excellent way to achieve the coziness of a living space using the touch of timber wood is these exposed ceilings. Some homes even install overhead beams either to provide support, enhance aesthetic appeal, or both.

Typically, Cape Cod-style homes have one story, or sometimes, 1 ½ stories. The space above the first floor has a slanted roof and short knee walls. You can find hardwood floors, multi-pane windows, and wood siding. They also often feature dormer windows for providing additional space, light, and ventilation. These homes have a boxy frame and a simple style, which often features a central hall, a master suite on the ground floor, and additional bedrooms or sleeping quarters upstairs. This is a cozy layout that works well for small families. You can add a garage to the side without ruining the aesthetic style. The Craftsman bungalow was born out of the Arts and Crafts Movement. It was a popular house style from 1905 to 1930s, and it has made a comeback today. If you want to know what a craftsman style home is, step inside. The emphasis is on natural materials, such as wood, brick, and stone. The distinguishing feature of the style is a large amount of interior woodwork, such as built-in shelving, furniture, staircases, railings, and seating.

The exterior part of a Craftsman-style home has wide front porches and low-pitched roofs with wide eave overhangs. It also comes with exposed roof rafters, braces under gables, decorative beams, and porches framed by tapered square columns. Craftsman-style homes also have big fireplaces and useable space in the attic. Colonial-style houses are best known for their symmetry. It evolved from their origins in the 13 US Colonies of the 1700s. These houses are often a two-story house, but the exact style of the home is often flexible. Usually, the house has a center entry, plus a roof with gable ends on the sides of the house instead of the front. Standard features include a square floor plan, chimney, center door, and a medium-pitched roof. Usually, the number of windows on the left and right sides of the center front door is the same. It’s because the typical Colonial home is based on the symmetrical, federal-style homes. Inspired by the houses in the French countryside, the Country style is a provincial style that came to America after World War I. This style dates back to the 18th century when France occupied most of eastern North America, with settlements that scattered along principal waterways. This is why Country-style homes are typical in riverside and valleys, where a stunning landscape is nearby.

Country-style homes often have one story with narrow windows and paired shutters. The roofs are steeply pitched and are either side-gabled or hipped. They also have a half-timbered frame and stucco walls. It usually has a curb appeal that makes the homes stand out. If you want being in your home to feel like traveling to Spain, Italy, or France, a Mediterranean-style home may be right up your alley. Mediterranean styles of architecture like Spanish Colonial Revival flourished in Southern California during the 1920s and 1930s. It was also found primarily in warm-weather states like Florida and Arizona. This architectural style for homes is modeled after the hacienda style. Originating from the United States, the ranch-style is a simple home architecture style modeled after rural Western ranches. This type of home was initially built during the 1930s and became popular during the 1940s to 1970s. It’s still being built until today. It was a popular home style for suburban homes back in its heyday.

The ranch style of architecture has a slight resemblance to the modern form of open floor plans and a seamless connection to the outdoors. It focuses mainly on practicality. Most ranch-style homes are single-story houses with low-pitched roofs and an L-shaped structure. The bedrooms are typically grouped on one side of the house. Newer ranch homes tend to have new exciting shapes than the typical rectangle or L-shape. Originating from England, Tudor-style houses have a close connection to the architectural elements of the early 16th century Tudor Dynasty. However, the Tudor houses that we see today are modern re-inventions that are loosely based on different late Medieval English prototypes to accommodate new preferences. Tudor-style homes are typically built in established neighborhoods of the early 20th century.

Common features of Tudor-style houses include prominent cross gables, steeply pitched roofs, tall and narrow windows, decorative half-timber framing. The steep-pitched roofs are great for snowy and rainy days, which is why many homes can be found in the Midwest and along the East Coast.

Popularized in the Victorian era, Victorian-style architecture is romantic, distinctive, and abundant in detail. It emerged from 1830 to 1910 under Queen Victoria’s reign. As with anything Victorian, this architectural style is highly decorative, featuring decorative trim work and painted shingles that give off a “gingerbread” feel. It was inspired by the intricate Gothic architecture and the prevailing public mindset at the time, which favored beauty and fashion equally with function. Thus, the ornate and elaborate design of Victorian homes became the norm.

Victorian-style homes often have two to three stories and are marked with features like off-center entrances, steep and varied rooflines, and rounded turrets. They also feature wood or stone exteriors, one-story porches, and elaborate trim. There are several styles under the Victorian style, such as Queen Anne, Gothic Revival, Italianate, stick style, Romanesque, and Second Empire. 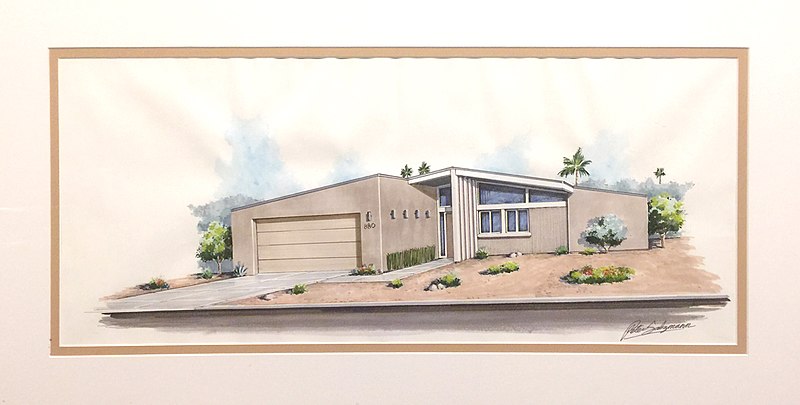 The Mid-Century Modern style is known for its simplicity and focuses on functionality. This is the style characteristic of the 1950s t0 1960s and has continued to be popular today. It has enjoyed a surge of popularity during recent years, as the style is being incorporated in contemporary-style homes.

Characterized by flat planes, open space, geometric lines, glass walls, and open floor plans – this style emphasized the idea of bringing the outdoors in. Right after World War II, new materials sprang forth, such as steel and plywood, which became a huge element in mid-century modern architecture and design. This style is also closely identified with some famous architects and designers due to their trademark styles. Modern and contemporary style often get confused with one another, but modern architecture refers to design inspired by modernism. It emerged during the first half of the 20th century and later became a dominant style after World War II. Due to the advancements of technology, steel, glass, and concrete became more accessible, and the popularity of these materials pushed the trend forward. Modernism rejects the traditional neoclassical architecture that has been popular throughout the 19th century. It favors simplicity and functionality of overdramatic ornamentation.

Because of the modern touch that these homes represent, modern-style homes feature progressive and forward-thinking design where everything is intentional and well-thought-of. For instance, modern-style homes use energy-saving technology to reduce energy consumption and lessen global footprint.

The last key feature of modern homes shows how they can seamlessly connect indoor to outdoor spaces. Their transitional designs are likewise intentional.